Arsenal forward, Theo Walcott, “disappointed” not to make England squad for Euro 2016 but accepts the decision of the coach, Roy Hodgson. 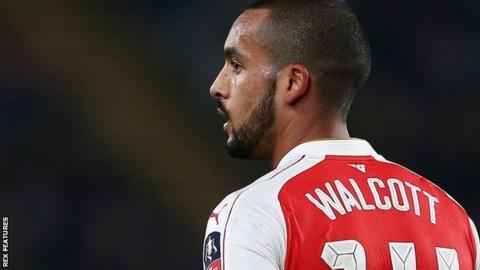 Manchester United teenage sensation Marcus Rashford and Andros Townsend were named ahead of Walcott in the provisional 26-man squad, which will be cut down to 23 by the end of this month.

Walcott said “I am of course disappointed not to make the squad, but I have spoken with Roy and respect his decision.
“I wish Roy and all the team the best of luck for a successful Euros.”

Club-mate Jack Wilshere, on the other hand, was delighted to be named in the squad despite missing the majority of the season through injury. The player took to popular social media website, and tweeted via his handle: “Absolutely buzzing! I can’t wait to meet up with the squad and start preparing for the Euros. Thanks for all the messages.”

Walcott was in England’s World Cup squad in 2006 but 10 years on which is supposed to be in his prime, the player will not be going to Euro 2016. Perhaps, with nothing to do, he’ll join the thousands of football fans who play Blackjack at Vegas Casino whilst waiting for the new season to start.

With him being omitted, playing in the coming world cup for the Three Lions is already a doubt. The position of the striker in the club is not even certain going into next season, especially as The Gunners would want to make more than the regular EPL title challenge.