Manchester United legend Roy Keane has slammed the goalkeeping mistake made by David de Gea during the Red Devilsâ€™ Premier League clash at Everton. The Spain international dwelled too long in possession and that allowed Dominic Calvert-Lewin to close down his clearance and deflect the ball into the net. 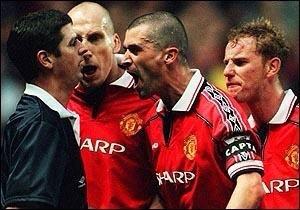 The Red Devils shot-stopper managed to redeem himself with a superb diving save few moments late but the damage was already made as the club only managed a 1-1 draw at Goodison Park. Speaking on Sky Sports, Keane was far from impressed with the performance of the United ace and said that he would have lynched him at the interval.

He told: â€œTrying to be too cleverâ€¦ he takes too long. What is he waiting for? You need to be quicker. These are huge moments with Manchester United trying to get into the top-four. Heâ€™s an experienced goalkeeper, what is he waiting for? Itâ€™s arrogance. I would have lynched him at half-time. Thereâ€™s no excuse for that. This is an experienced, international goalkeeper. Itâ€™s madness.â€

United had the chance to close the gap to fourth-placed Chelsea for not the first time this season but they squandered the opportunity after struggling to test the opposition goalkeeper through the course of the second half. Bruno Fernandes levelled the scores for United in the 31st minute but they needed some good fortune with Toffees goalkeeper Jordan Pickford conceding the goaldue to his poor handling.

With the result, United continue to remain three points behind fourth-placed Chelsea on the standings but they have been closed down by Wolverhampton Wanderers, who are adrift of them on only goal difference. Solskjaerâ€™s side are scheduled to face Derby County on the road during Thursdayâ€™s FA Cup fifth round tie before hosting Manchester City in the league derby on Sunday.